Posted on December 30, 2012 by portugaluntouchedtoday

Once a pilgrim has arrived into Santiago, it is impossible not to get completely engrossed in exploring this marvelous city on foot.  Santiago is the capital of Galicia and the old quarter was nominated a World Heritage Site by UNESCO in 1985. 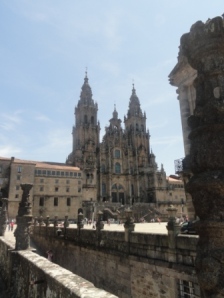 Day upon day, pilgrims from all over the world instinctively walk, cycle or ride on horseback into the main square ‘ Praza do Obradoiro’ around which there is situated the Cathedral, XIIIV Century Pazo de Raxoi (Raxoi’s Palace, now the city hall) and Hostal dos Reis Católicos, founded in 1492 as a pilgrims’ hospice (converted to a parador in 1954).

The Cathedral itself is surrounded by four squares:-

Praza de la Azabacheria  –  also considered important and only a short walk from the Plaza del Obradoiro.   Once famous for jewellery items made from the black gem stone Jet, the craftsmen who fashioned these stones were called “azabacheros” and it is from them and their trade that the square gets its name.

The passage from Praza de la Asabacheria to Praza de Obradoira can be reached by passing under the arch, ‘Arco de Palacio’ between the cathedral and the ‘Reyes Catolicos‘ Hotel, and then descending some steps.   It is under this arch that, if you are lucky enough, you can encounter musicians, sometimes dressed in medieval costumes, playing or piping music on typical Galician bagpipes to arriving pilgrims coming from the northern route making one’s entrance even more emotional and meaningful!

Praza de la Quintana – can be reached by a variety of routes and faces one of facades of Santiago Cathedral.

Praza de las Platerias  –  a smaller square surrounded by splendid examples of Galician architecture and with an ornate fountain at its centre (the fountain of horses).

Visiting the Cathedral is obviously everyone’s priority and ideally this should be done in the morning to take in the 12H00 Pilgrim’s Mass which is held daily in honour of the pilgrims.   Plan to get there at least an hour before mass begins allowing enough time to have a good look around the Cathedral itself as well as see the Tomb of St. James where there is inevitably a queue of people waiting to give the statue either the traditional hug or a touch as a sign of gratitude for their journey.

Walking into the Cathedral through the ‘Pórtico da Gloria’ (Gate of Glory) is a totally breathtaking sight not only for the size of the Cathedral itself but all its wonderful array of different architectures.  Confessional boxes line the walls of the main aisle with some being wholly dedicated to foreign language pilgrims.

By noon pews and aisles are literally packed and everyone is anxiously awaiting for the service to get underway.  Then a procession follows with the bishop and several priests walking through the crowds from a side entrance to the main central area of the Cathedral.  The bishop leads the service and pilgrim groups are welcomed by having their names read out and where their journey began. Our Terra Verde Group were privileged to be mentioned as one of the largest (almost 100) that they had seen who had walked the Coastal Route via Portugal and Spain. 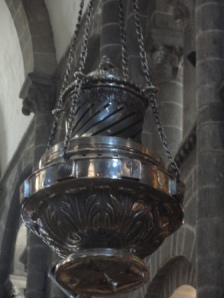 The highlight of the Pilgrims’ Mass is the swinging of the huge and famous ‘Botafumeiro’ (incensory), the largest in the world weighing in at 80 kgs and hanging from ropes pulled by eight priests.  It is a magnificent sight to see as it swings from side to side spreading clouds of its incense smoke all of which coincides with the playing of the beautiful Hymn to Santiago.

All pilgrims who have completed the last 100 kms on foot or horseback or 200 kms by bike are considered to have officially completed the pilgrimage to Santiago.  Pilgrims have always wanted to record their journey and in early days they would carry a scallop shell as a symbol of their arrival at the Tomb of St. James.  In those days it was also used as a water and food vessel.  Then from the 13th Century, due to fraudulency with vendors selling scallop shells at the entrance of the city, a document called the ‘evidential letter’ was issued as a more effective way of recording pilgrimages. 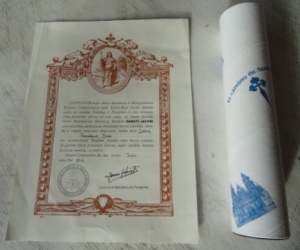 Today, modern-day pilgrims carry their ‘credencial’ which has been stamped along the way at churches, coffee shops, general stores, etc. and this is produced as a form of evidence at the ‘Oficina del Peregrino’ in Santiago (located close to the Cathedral) which allows the ‘Oficina’ to issue a ‘Compostela’.   The ‘Compostela’ is a certificate written in Latin where the ‘Oficina’ handwrites the pilgrim’s Latin name on it and is presented in a protective tube.  In early days the ‘Compostela’ was an important document for pilgrims in that it gave them the right to use the hospital (housed in the Hotel Hostal de Los Reyes Católicos in the 16th century), for health needs plus other facilities.   Interestingly the parador continues the tradition of pilgrim hospitality by providing free meals for three days to 10 pilgrims on production of the ‘Compostela’.  With the growth, in the 20th century, of pilgrims and visitors arriving in many forms of transport including cars it was thought that the pilgrimage would disappear and therefore the Cathedral of Santiago decided that a pilgrim should earn his ‘Compostela’ as proof of his trip. 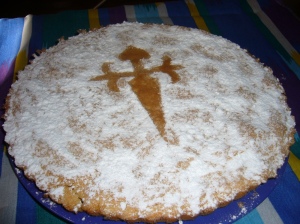 Don’t miss trying the delicious local gastronomy at the many tapas bars and restaurants all of which can be located on foot.  Pair the food with the famous Albariño wines which are a credit to this beautiful region.  Many restaurants are located in terraced gardens where you need to walk into the building to get to the back area.  A leisurely afternoon can be spent sitting in these gardens under lovely old trees sharing a long lunch with friends.   Another do not miss, is the ‘Tarte de Santiago’ which is the traditional almond tart made from ground almonds, eggs and sugar.  It is finished with sprinkled icing sugar, marked with the cross of the knights of Santiago and fortunately sold everywhere.

There is always so much to see and do in Santiago de Compostela so do allow yourself enough time to see it all as you will find it unforgettable!

To follow this amazing walk from Porto along the entire coast of northern Portugal into Spain and then continuing along the Spanish coast cutting inland to Santiago de Compostela please see the links below:-